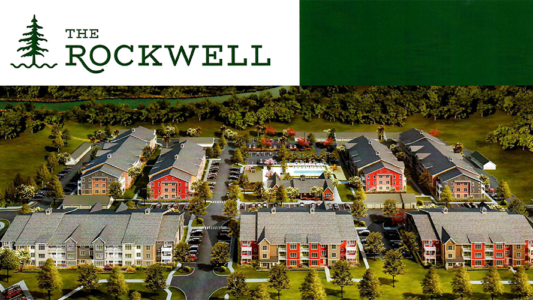 As fencing went up around the side of the apartment complex, it marks another success for housing. The NRP Group, a builder and manager of multifamily housing, is developing the property in partnership with M&T Bank and HQ Capital.

The residential development at 65 River Road West will be comprised of seven garden-style residential buildings, 204 units, a clubhouse, pool and gear garage for recreational equipment.

The NRP Group is “delighted to contribute to the continued development of this mixed-use village with the addition of The Rockwell,” according to Carolyn Mendel, vice president of development. “Riverbridge North and the town of Berlin have worked closely with NRP to ensure that a vibrant community will take shape, and we look forward to welcoming our first residents in the near future.”

At full build-out, the entire Riverbridge community will consist of 26 acres, leaving 88 acres of undeveloped conservation land surrounding the development. Walking trails as well as a kayak and canoe launch on the North Brook will be located adjacent to the property.

“The fact the town would have the opportunity to boost affordable housing above 10 percent appealed to us,” Wheeler said about the housing component of the original plans.

With a state target of 10 percent affordable housing, developers can use the comprehensive permit process to avoid some local zoning restrictions if a town is below that level.

Berlin had had success with Local Initiative Petitions, working with developers, resulting in housing that met state criteria. That included 120 units of over-55 housing, about 100 senior housing, about 60 in co-housing and now 200 in apartments. With about 1,200 housing units in town, that could keep Berlin above the state minimum for a while and allow the town to chart its own course.

Part of the goal, Wheeler said, is also to ensure housing that is in the mid-range.

The goal is a diversity in housing, he said, including “to make sure we keep viable numbers of school-age children.” That is necessary to keep strong schools.

He said in the regional statistics, Berlin is the second highest in average age.

With the apartments going forward, that housing could end up on the next census, Wheeler said, and put the town above the 10 percent “by a comfortable margin and put us in the driver’s seat.”

That could include adding affordable units in smaller locations, perhaps using tax title parcels and partnering with organizations like Habitat for Humanity to add more affordable units around town.

Wheeler said one impact is traffic. Much of the traffic impact is not from local business but from people cutting through town. He noted drivers often skirt traffic congestion on the highways by taking Route 62 through town.